Hello Folks, Welcome back to my channel. Our video for today is about the Omega Speedmaster Professional Moonwatch Sapphire Sandwich watch. Reference # 311.30.42.30.01.006.

This watch is one of the iconic watches in history. The First watch worn on the Moon. Worn on multiple box office movies like Apollo 13 by Tom Hanks, that chronicles the 3rd Moon landing.  The American by George Clooney on a leather strap, and many other box office movies. The Omega Speedmaster Professional Moonwatch in all its variations is an icon, and while the “Sapphire Sandwich” may be a newer evolution of the classic design, it remains true to the roots of what made the watch so special in the first place. 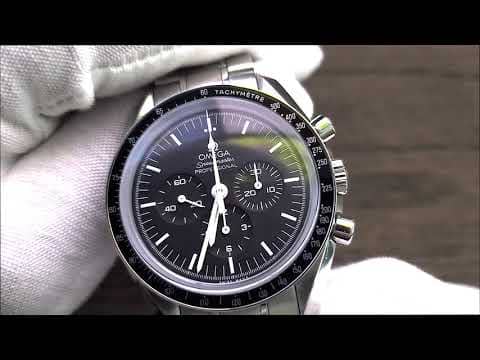 Transcript of the video

Let’s remove the black sleeve. You’ll see the 1st hint of what’s inside given by the iconic Omega Speedmaster Professional seahorse medal. Why is it called “Sandwich”? Omega had discontinued the reference 3572.50, and replaced it with the reference 3573.50, which swapped out the domed acrylic crystal of its predecessor for a box-shaped sapphire crystal. It was nicknamed “Sapphire Sandwich” Speedmaster Professional

Now, let’s open this huge box from Omega. On top of the box, a stainless-steel medal with the Speedmaster seahorse, or also called the Omega Hippocampus that started in the 1950’s, from an engraver named Jean-Pierre Borle who was working at Omega. You can also see the Omega logo at the bottom of the medal. An embroidered “Legendary Moonwatch” in red.

At the back of the box, are compartments for the Omega operating instructions, and a black card holder that also has the Omega logo at the bottom. The card holder has both the international warranty and pictograms cards that has the reference #, and the caliber of this watch. I also kept the original receipt from the Omega Boutique, in Scottsdale Arizona.

Underneath the box, you will have additional compartments that has 2 Omega booklets. The 1st one has the instructions on how to remove the bracelet of the watch and how to replace it with an Omega NATO is also inside the box. You will also read a disclaimer from Omega, “This manipulation can result in damage to your watch”, “Your Omega Boutique will be pleased to make the change for you”. If you are not comfortable doing it by yourself, visit your local Omega Store. The second book shows the Omega Speedmaster Logo and states the Legendary Moonwatch. The book tells about the birth of the Speedmaster in 1957 and tells the story of the use of the Omega Speedmaster in space.  It also includes cool NASA images.

The Omega Speedmaster Coin measures about 60mm. It is loose interpretation of the early Speedmaster case backs. Now, let’s look at the Speedy Moonwatch. Production of this model was 2019. Movement is manual winding which means if you plan to wear this watch daily, you also must wind it daily. It is best practice to wind your manual winding watches at the same time every day for better power reserve usage. The Speedmaster has a 48-hour power reserve.

How to Wind the watch?

Wind the crown of the watch clockwise 20-40 times. You’ll feel resistance and there will come to a point that it can no longer be wounded, and you are ready to use the watch.

The bracelet is steel and the caliber is 1863 and it has 18 jewels. The case is steel that has diameter of 42mm. Lug to Lug to 20mm. The watch is water resistant up to 50 meters, but me personally, I would not use this watch underwater. If you really want to try this watch underwater, I suggest to not operate the pushers and crown underwater to avoid damaging the watch. The back is open. You can see the amazing mechanical movement of the watch. The bezel material is also steel with the tachymeter. The crystal glass is Sapphire and Dial is black and white with 3 sub dials with a center mounted second hand which.